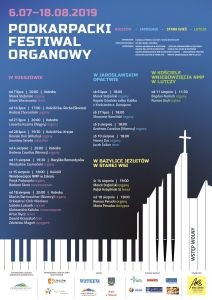 In the summer months, from 7 July to 18 August 2019, continuously for 28 years in Rzeszów and also in three other locations in the Subcarpathian region, organ and chamber music concerts as well as oratorio and artist performances will take place as part of The Sucarpathian Organ Festival.

The concerts will take place in modern and historic temples of the capital of the region: the Cathedral, the Bernardine Basilica, the Saint Cross Church as well as the Assumption of the Blessed Virgin Mary Church in Zalesie and, for the first time, the Church of Saint Roch in Słocina, equipped with a high-class concert organs. In addition, traditionally two important sacral buildings of the Subcarpatian region are included in the festival calendar: Abbey of Jaroslav and the Jesuits Basilica in Stara Wieś. The church of the Assumption of the Virgin Mary in Lutcza debuts this year as a concert venue. As a result of the systematic expansion of the geographical area of ​​the festival, the Organ and Chamber Music Evenings in the Cathedral and Churches of Rzeszów with accompanying cycles this year takes the name of the Subcarpathian Organ Festival.

The virtuosos of organs from Poland, Germany, Italy and Hungary were invited to participate in this year's concerts. The programme will include chamber and vocal music with the accompaniment of organs, oratorio works of Stanisław Moniuszko on the 200th anniversary of the composer's birth, as well as an artistic spoken word reminiscent of the persistent message of eminent Poles: Saint John Paul II, bl. Fr. Jerzy Popiełuszko and cardinal Stefan Wyszyński.